Note: We visited ENKI Brewing back on Valentine’s Day, before Minnesota bars and restaurants were closed and the stay-at-home order was in place. Their taproom is currently closed, but they are still offering curbside pickup. More info here.

On Valentine’s Day this year, we decided to go the unconventional route and go axe throwing at Victoria Burrow. Romantic, right? We thought so. Afterwards, we decided to hit up the close-by ENKI Brewing for some brews.

We weren’t in any mood to hang around outside in the sub-zero February weather, but had it been warmer out, we definitely would have been up for the sizeable deck and lower patio attached to ENKI’s renovated warehouse space.

Upon entering ENKI’s taproom, a giant logo of the ancient Sumerian water god after which they are named greets you. The “E” in ENKI is also an ampersand, representing the brewery’s spirit of happiness and bringing people together.

“Oh my god, do they have a swimming pool?!” Mandi said upon entering. It wasn’t a swimming pool, but halfway across ENKI’s sprawling taproom we found what is perhaps the coolest feature of the brewery: a cutout to the floor below where ENKI’s brewing process takes place.

The atmosphere at ENKI on a Friday night near closing time was subdued but alive, with people filling up most of the spots along the bar and about half in the main seating area.

Being the classy people we are, we took the spot you can find in most breweries that I like to think of as “the spot that would be behind a velvet rope if you were in a club,” on the leather couches in the corner. From there we talked, played Bananagrams, and enjoyed excellent tacos and flatbreads from ENKI’s own kitchen. 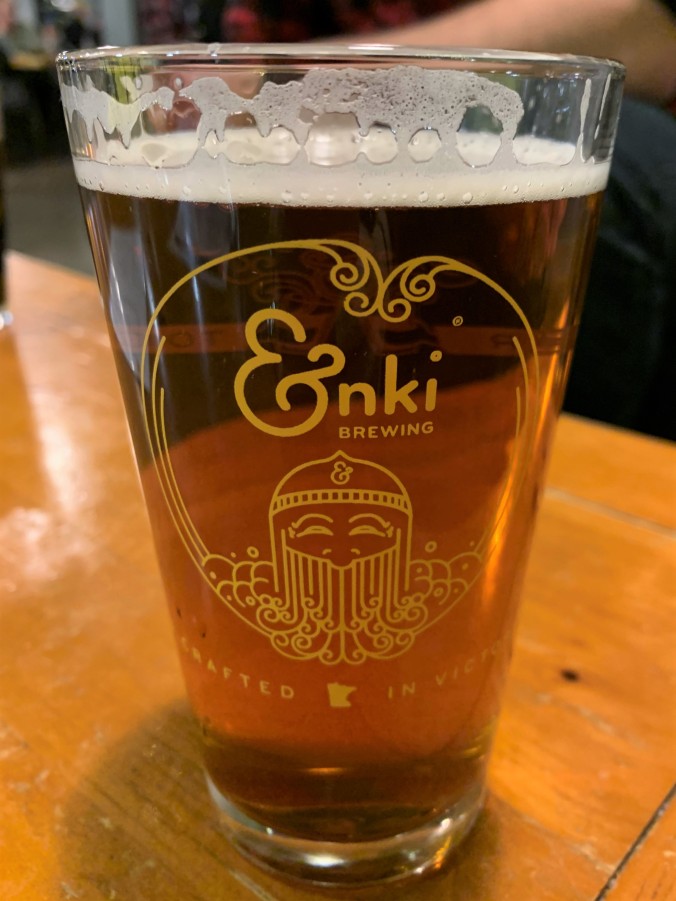 A standout for us at ENKI was the Mocha Porter. There was a mint-infused version on tap when we went that tasted exactly like an Andes mint. You can read my review of that brew as well as the others we tried at the Untappd links below: