—This is a guest review authored by Sam’s amazing fiance, Adam—

Cons: May be busy, requiring a wait to get a beer or a table. Food was good, but didn’t blow us away.

Number one reason you should go: You’re in charge of picking a restaurant but you also want to enjoy great beer. This is a great combination of the two and arguable better than other similar locations that have attempted this formula.

For the second half of our review doubleheader (following Fair State Brewing Company) we braved the frigid November weather and journeyed to The Freehouse. 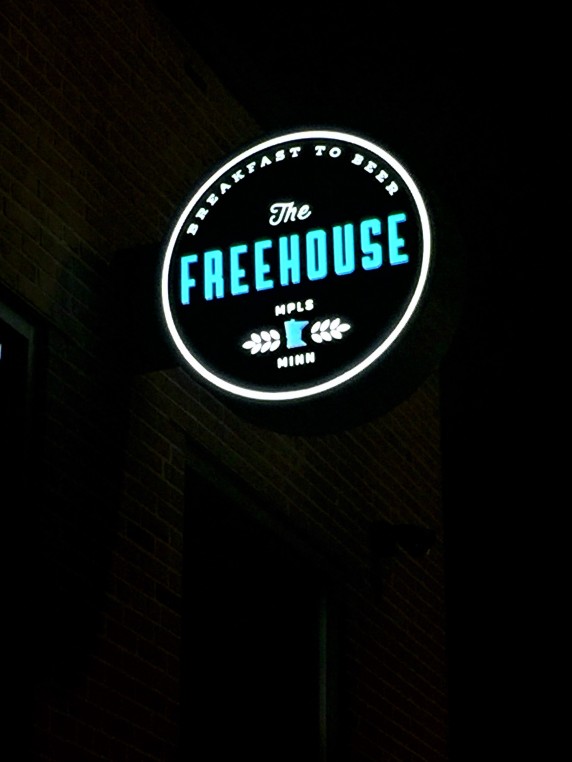 The Freehouse is located in the trendy North Loop district of Minneapolis and certainly carries that aesthetic through to their décor. Inside it is sparsely lit with light bulbs creatively hung on non-traditional fixtures throughout. It carries a very industrial vibe with exposed piping and wood that matches the warehouse feel of the area. The Volstead lounge in particular had an interesting vibe with keg lighting dangling above you. The dining room is spacious and suited for larger crowds than other locations we have visited, which came in handy as they had filled the seats on the Thursday evening we visited.

Alongside The Freehouse’s own beer pairings are “guest beers” from: Ballast Point, 56 Brewing, Boom Island, Castle Danger, Lagunitas, Maiden Rock and Ommegang, as well as a variety of cans and bottles.

Interestingly, they also have a cocktail menu in addition to their beer offerings. I cringed when I saw the “modern beer cocktails” part of the menu as images of the drinks menu at a Red Robin are conjured with their “Blue Moon Can-Crafted Cocktail” and “Blue Moon Beer Shake”, though the selections here look much more well done and legitimate.

Right away we took note of the food menu which was larger and more upscale than other taprooms we had been to—so much so that The Freehouse is functionally more of a restaurant that offers self-brewed beer rather than a standalone taproom. In their own words, the location is created “with the dining experience in mind” which is very evident in the layout and menu offerings. 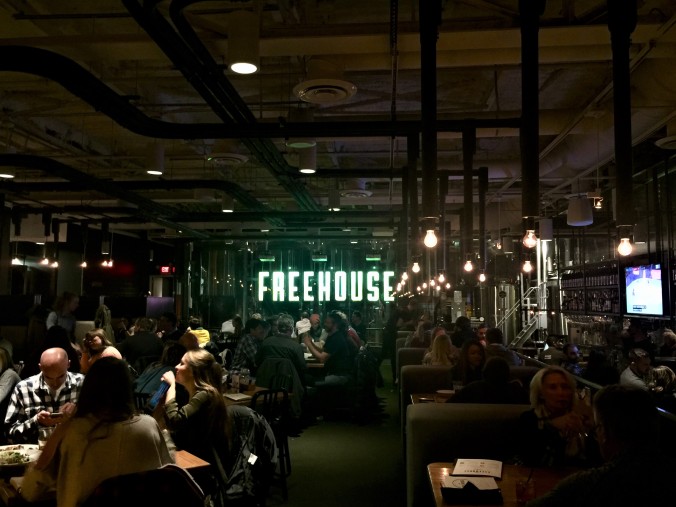 Along with our burgers and banh mi sandwiches we were able to try 3 of their beers. Overall, we found the beer to be well-executed and intriguing. The No. 24 Tea-Infused Honey Wheat was particularly unique with a taste resembling root beer or RC Cola. Among the beers we tried I gave this the edge as my favorite almost entirely based on novelty, execution and not being undrinkable. The Freehouse succeeds in pursuing a concept that I can imagine might veer into undrinkability pretty quickly. The No. 39 Maple Baltic Porter was also an interesting pour as well. Unlike other beers, the maple taste wasn’t overpowering, instead complementing the other flavors well.

You can find my reviews of the Maple Baltic Porter and Tea-Infused Honey Wheat as well as Sam’s review of the No. 2 IPA below via Untappd:

One thought on “The Freehouse”