Cons: Graduation party feel, Belgian beers (not a con for everyone obviously)

Number one reason you should go: Boom Island felt like a party I wasn’t sure I was invited to. But you might be.

If there is one thing that can be said for Boom Island Brewing, it is that it is that it is like no other brewery around. I first encountered them at Winterfest in 2015, and was immediately intrigued upon the sight of a french horn sitting on their table (UPDATE: evidently I documented this very moment on Instagram). When I told owner Kevin Welch that I played french horn in high school and college, he picked it up and started playing right then and there. He told me his wife played, too, and I am guessing that fact is the inspiration for Boom Island’s logo of two horns linked together. 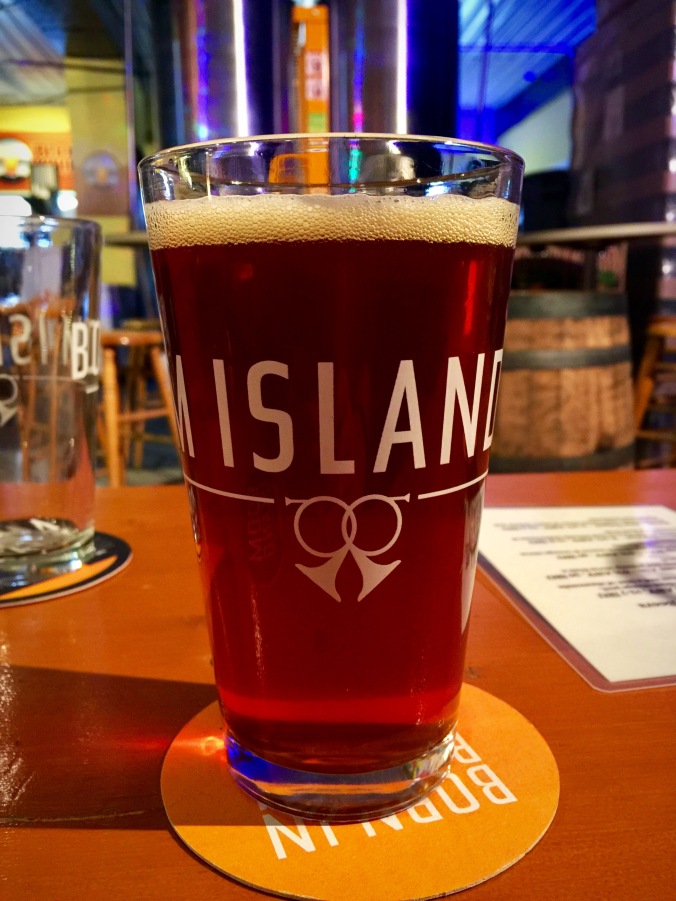 When they aren’t attending beer festivals, the french horns hang up near the ceiling at the “Boom Room,” Boom Island’s taproom/brewery/garage. You can find them (and the Boom Room) if you want, but it will take a bit of searching. From Washington Avenue, the street where Boom Island’s address is listed, there is scant evidence of a brewery. Adam and I thought we’d maybe gotten the wrong block until we discovered neon signs behind the glare of a couple small windows. 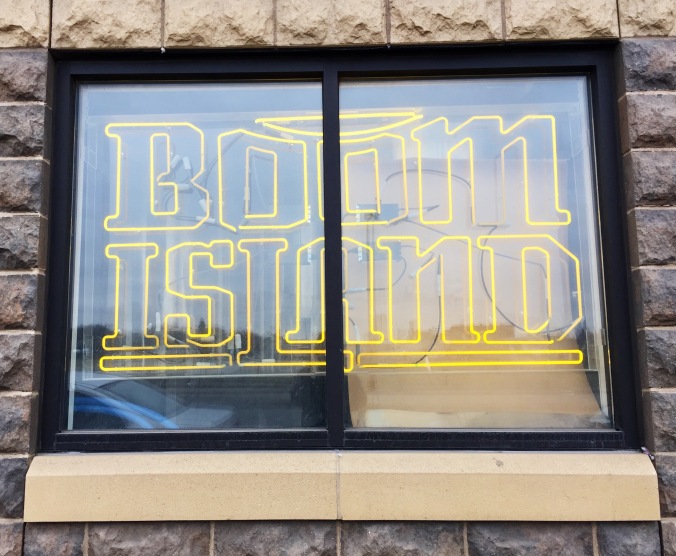 Rounding the corner at 21st Avenue, we found another piece of evidence that indicated we were on the right trail: a canvas Boom Island sign zip-tied to a fence, one corner blowing in the wind. Another turn to our right and we saw a mural on a parking lot wall: getting closer. Another turn and we were met with this lovely little sight: 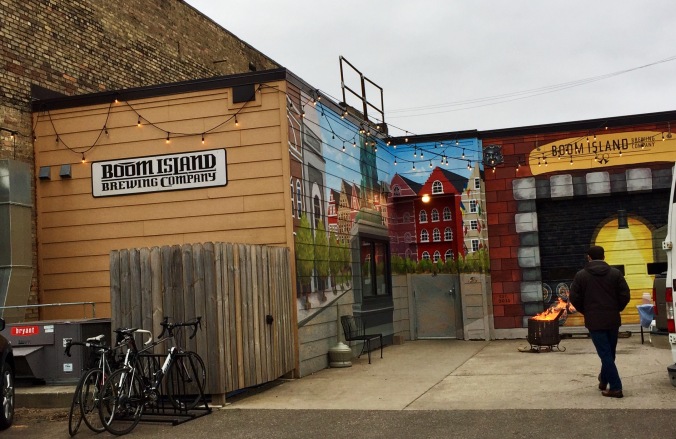 It was like we’d reached the end of a treasure hunt. 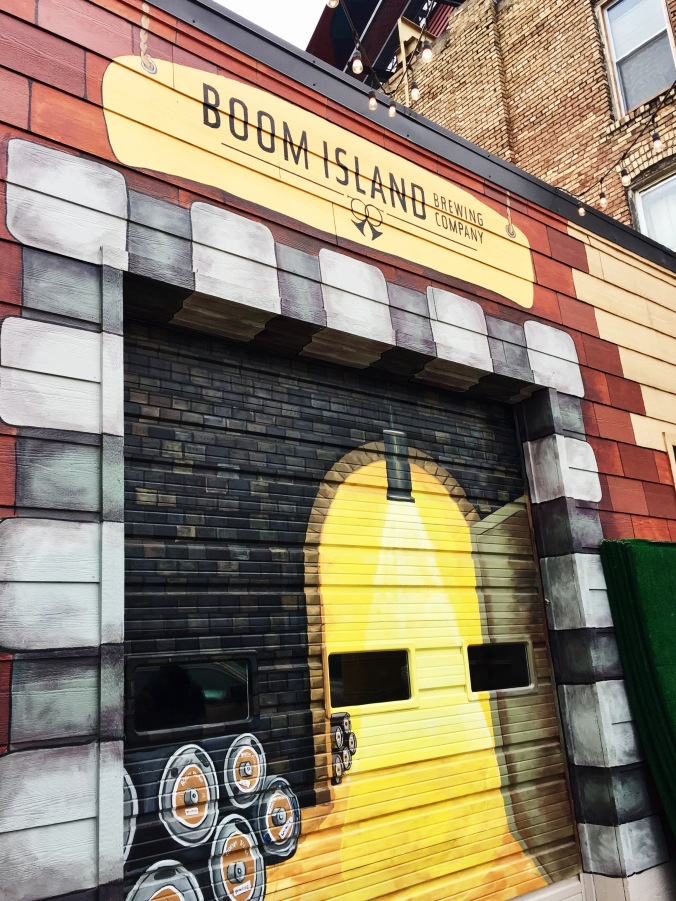 Many breweries ascribe to the no-frills style of operation, whether taking no pains to cover up the fact that they operate out of an old grain bin or serving beer, as 56 Brewing does, out of a literal garage. But even those places have glimmers of posh or flare, whether in the form of slick steel sculptures placed wantonly about or whether, in Bang Brewing’s, in the form of an impeccably designed interior. 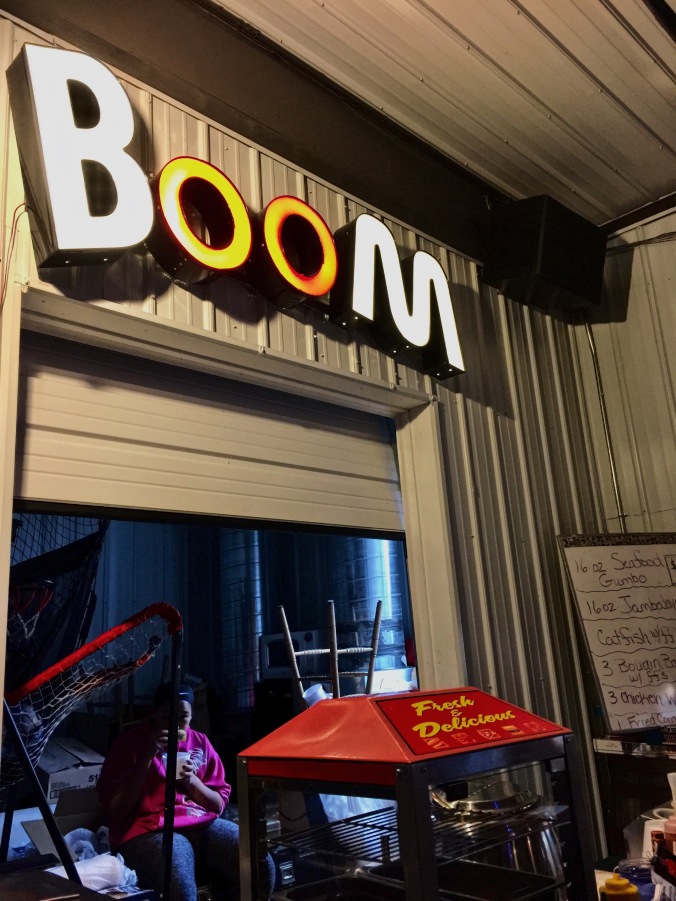 It took me a while to figure out exactly how I felt about Boom Island’s atmosphere. It was no-frills, sure, but so were other breweries. So I broke down the components of the place. What did it have? A basketball game being projected on a sheet hanging over the bar. Three resident dogs roaming about. A bonfire. A potluck-style line of Cajun food on a plastic table. Then it came to me: being at Boom Island didn’t just feel like being at a low-key brewery, per say. It felt more like being at a neighborhood block party or a family reunion. Or maybe more like a graduation party, since I didn’t know anyone else there and felt a little like I was on the very outer fringes of increasingly personal concentric circles. 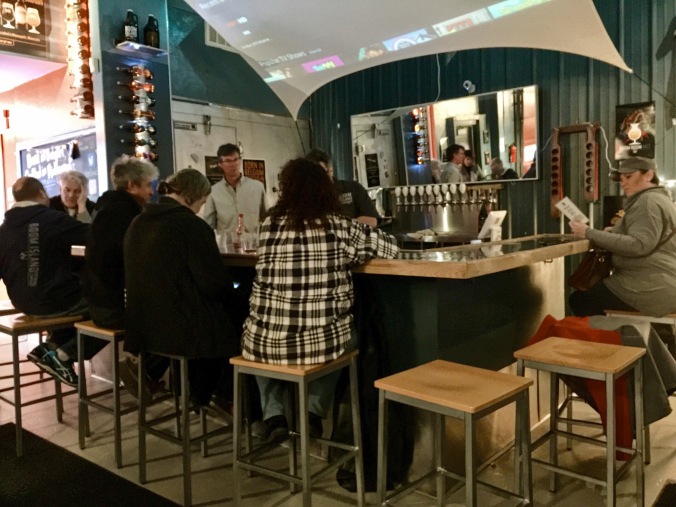 Or maybe I’m reading way too much into it, and it’s just a brewery.

My friend Suzanne certainly enjoyed the vibe of the place.

“Come for the atmosphere, stay for the beer,” she said. “But don’t get the Django, it’s not hoppy.”

Which is indicative of another unfortunate aspect (at least for those who lean heavily towards the bitter end of the beer spectrum) of this brewery that I so wanted to like: they brew Belgian beers, the floral, fruity, complex style loved by so many of which I am generally not a fan.

That’s not to say I didn’t like any of their beers. I greatly enjoyed their Triple Brett American Wild Ale (4.5/5), the dry, champagne-like sour available for a limited time. Follow that link to read my review on Untappd, as well as my reviews for their Belgian Chocolate Stout (1.75/5), Bolleke Plus (3/5), and Saison (3.75/5). As a side note – and this is something that will apply to all of my beer reviews – keep in mind that I favor heavily hopped, citrusy beers and generally do not prefer stouts, porters, or malty/banana/wheat flavor. My beer reviews will reflect those preferences, so take them with a grain of salt. 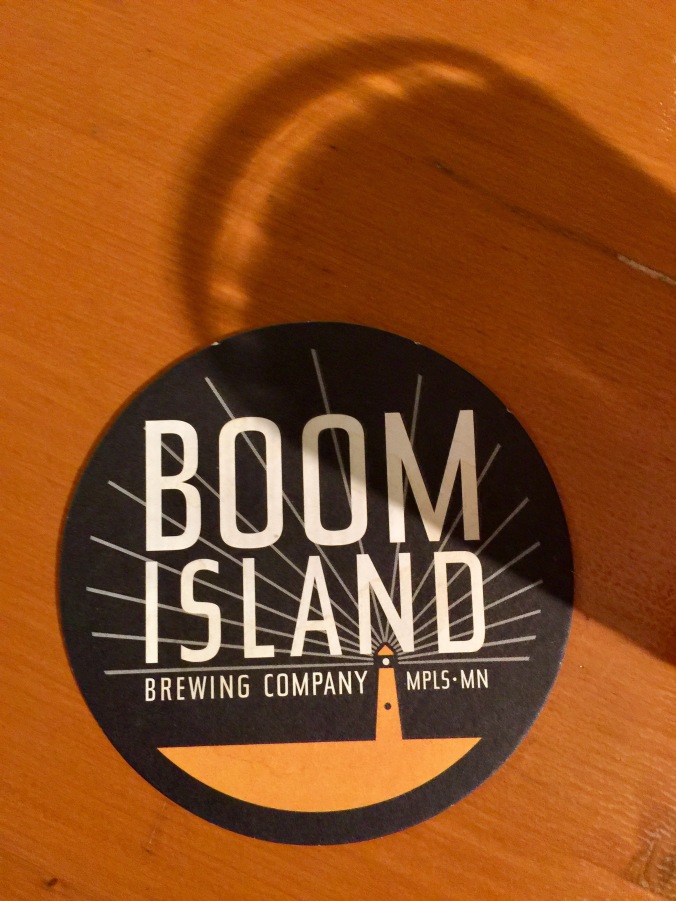